skip to main | skip to sidebar

It is clear that Sahidic Coptic John 1:1 says that "the Word was a god." But it has been remarked that Coptic John 1:18 contradicts this, because this verse uses the Coptic definite article before the common noun, noute: p.noute, with reference to the Son.

But is this reference definitizing, equating the Son with God, or is it merely anaphoric, referencing "the" god of John 1:1c?

As a basically Alexandrian text, "the only-[begotten] god" would be expected in the Coptic version. That is, in fact, the reading of the Coptic Bohairic version: pimonogenes nnouti, which Horner renders as "the only-begotten God" in the main text and as "the divine only-begotten" in his footnotes. However, there was obviously some support among the Sahidic Coptic translators for the "only-[begotten] son" reading also, because they combined, or conflated, the two variant readings in the Sahidic Coptic version, giving us pnoute pShre nouwt , literally, "the god, the only son." (According to Jesus as Theos: A Textual Examination, by Brian James Wright, a similarly conflated Greek variant of John 1:18, ho monogenhs huios theos, was known to Ambrose, Irenaeus, and Origen.)

By putting the definite article here, the Sahidic Coptic translators mirror the Greek's ho monogenhs theos. But does this say the Word is God? No, for the Greek here can be translated simply, "the only-begotten god."

George Horner's English translation of the Sahidic Coptic renders pnoute pShre nouwt as "God, the only Son." But this is not what the Coptic says, this is merely Reverend Horner's English version of the Coptic, perhaps revealing his own theological presuppositions. The Coptic of this verse, John 1:18, can also be translated as "the god, the only son." The use of the Coptic definite article here does not demand the translation, "God." Particularly not when such a reading fails to correspond with the context and with what has already been stated at Coptic John 1:1 in both the Sahidic and the Bohairic versions: "the Word was a god."

Horner himself shows that not every instance of p.noute means "God," but may also mean "god," in context.

For example, at Acts 7:43, the Sahidic Coptic text has the definite article bound to the word for god, p.noute. Does Horner arbitrarily translate it as "God"? Not at all. He renders p.noute at Acts 7:43 as "the god," giving us "And ye took the tabernacle of Molokh and the star of the god [Coptic, p.noute] Rephan, the forms which ye made to worship them."

This is so because both John 1:1 and John 1:18 describe a contrast between God and his Son. In John 1:1, the Son or Word is "with" or "in the presence" of God. At John 1:18, God is the One Whom no one has ever seen, whereas the Son is the one who represented or revealed Him on earth. Identity of the Son with God is not the theme of either John 1:1 or John 1:18, whereas contrast is emphasized.

Sahidic Coptic John 1:18, therefore, cannot be used to contradict John 1:1, because the translation, "God the only Son" is not the only possible or contextually accurate translation of this Coptic verse in English. John 1:18 is not identifying the divine Son as being the same as God Almighty, but is actually highlighting the distinction between them.
Posted by Memra at 7:21 PM

Thank you for sharing your knowledge of the language.

Your comments are deeply appreciated. Studying Coptic is a joyful experience, and I am more than happy to share with others what I am learning.

Besides, the truth is too vital to be hidden away.

Hello, thank you for your comment on my blog! Praise Jah!!!!

Also of interest concerning the Coptic of John 1:18 is this:

"In the proto-Bohairic version (Papyrus Bodmer III, the text of which was partially reconstructed by Rodolphe Kasser) the first occurrence of "God" in John 1:1 is in the Nomina Sacra form, whereas the second occurrence is spelled out. In John 1:18 the word "God" (which no one has seen) is in the Nomina Sacra form, while the word "God" (only-begotten) is spelled out."

Hey,has anyone looked at the avenue of Koine Greek having about 6 diff. Genetive cases... Ie. where it says monogeneis theos (John1:18b)it in actual fact can be translated:"only-begotten of God"same as later in the Chapter:Andreas adelfos Simonas,ie brother of Simon...this will get rid of the eternal conflict between the renderings of the textus Receptus based versions opposed to the Byzantine line(onlybegotten Son), please give a clue to the unacquainted, Agape'

Thank you for that explanation! It clearly makes sence as to the context of each of those sentences.

There are three different versions of John 1:18 in the Greek. The KJV and other older translations used the simplest "only begotten Son", whilst Wstcott and Hort and other more modern scholars think that the version "only begotten God" is the more original. And a rule in Bible scholarship states that the most difficult reading usually is the original. 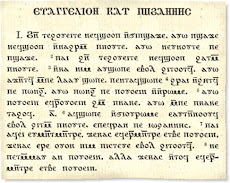